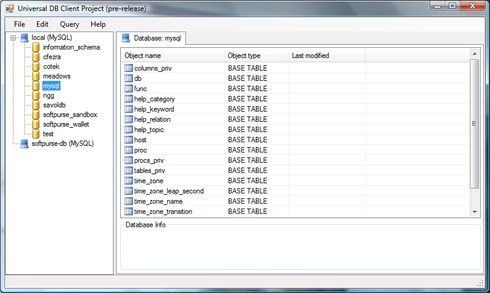 Or unfinished projects. I’ve got lots of them. Late last year, I thought a tool that could help migrate structure and data from one database management system to another (e.g. MySQL to SQL Server) was a good idea. Next, I thought of a way to actually make people using the application on the regular since database migration was probably a once in a lifetime task. That’s how the Universal Database Client project commenced.

Development tool of choice was VS2008. I knew if I had to write a database client, I had to set it apart from others like Navicat, or SQLYog (for MySQL) by addressing some issues I had with using them. I figured those two clients didnt take advantage of multi-threading and always have their GUI frozen when connecting to a database server or running queries. I read up on background tasks in .NET and compared different ways to go about it. Within 3 weeks, I had a working application which could connect to a MySQL server, enumerate databases, show tables, and execute queries.

And that was it. Development was always during my spare time. That spare time never seemed to come anymore. It’s over 3 months now since I last touched a line of code in the project. Seems like every time I think about it, I tend to give an excuse of how overwhelmed I am with my workplace projects.

My Twitter friends came up with several likely reasons for this.

I’ve decided to commence development next month. I’ll do my best to stop procrastinating and grow my project management knowledge. By the way, the project is meant to be free and open source. It’s written in C#. I will appreciate additional developers on this project. Contact me if you are interested.

Do you know other steps that should be taken to prevent slow downs in personal projects, sound off in the comments.

A little rant about Rails

Ok, so I downloaded and installed Visual Studio 2012 two days ago and OMG using it is euphoric. When it dawned on me yesterday that my days pretending[1] to be a .NET programmer will soon be over and I’ll be back to my CFWheels/Railo... Continue →